The polished cream stone pavements and glazed, geometric tiles of the classic old buildings give Lisboa an unusual scaly sheen, fitting for a city of fish-eaters. Perhaps the town planners and architects took inspiration from the sea, like Gaudi did in Barcelona... but instead of curvy follies, they laid crazy pavement mosaics and fancifully tiled whole facades. The narrow streets cobbled in dark stone like the skin of an ancient oceangoing dinosaur, often give a glimpse of the sea. Most restaurants will offer you more than a taste of it, chargrilled and very fresh for a handful of coin. 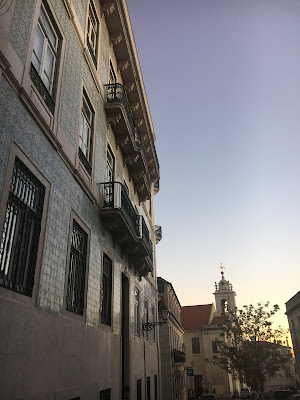 My first Portuguese meal was at Flor de Sapadores, in Penha de França. No frills white tile, plastic and metal decor... but i figure if all the grandmas eat there it must be good. I never saw such a convivial gathering of independent, happy pensioners. Without understanding the menu, I ordered one of five kinds of fish. I was not disappointed: two very fresh whole fish chargrilled, side salad and a boiled spud for €6.50.


A balboa-blues festival called Lisbon Dance Mash Up had drawn me to Portugal. After the two day feast of classes and live music, I stayed a few weeks to explore. I was curious about this country that everyone said I would love. In my first week, I rode the charming, clattering tram and I was cat-called on the street at sunset. I was walking uphill, away from a popular 'mirador' where groups of people gather to drink beer, and watch the sunset. A handful of Africans stood on the fringe looking at their phones, looking like trouble ... not looking at the sunset.
-- Africa!
A guy with a bandana around his shaved head shouts at me, as I take a detour to try and avoid him. His opening line draws on our only visible link, our distant kinship. He followed me for a few paces, talking at me, I can't remember in what language.

I said 'Ciao' with a smile and a wave, hoping that this would be confusing ... because it means hello and goodbye in a language that reveals little about me. Mainly I was relying on my body language to tell him that I was not interested. I continued to walk very quickly up the street, turning my back to him. It was nothing personal and nothing to do with the way he looked ... it was just the street corner attitude. What does street corner man have to offer me? Why are they always in groups of just men?

As I turned my back, his oily tone turned to anger. "Ciao," he replied in a mocking drawl, and then uttered a stream of words that I'm sure were insults. The whole ordeal lasted maybe maybe two minutes. As I walk up the street there is another group of black guys standing on a corner ...I worry that they will stop me. I focus on trying to get past these groups of men as quickly as possible. Luckily the catcaller stopped following and the next group of guys did not bother me. At the end of the street was a busy intersection ... I could breathe easy again. 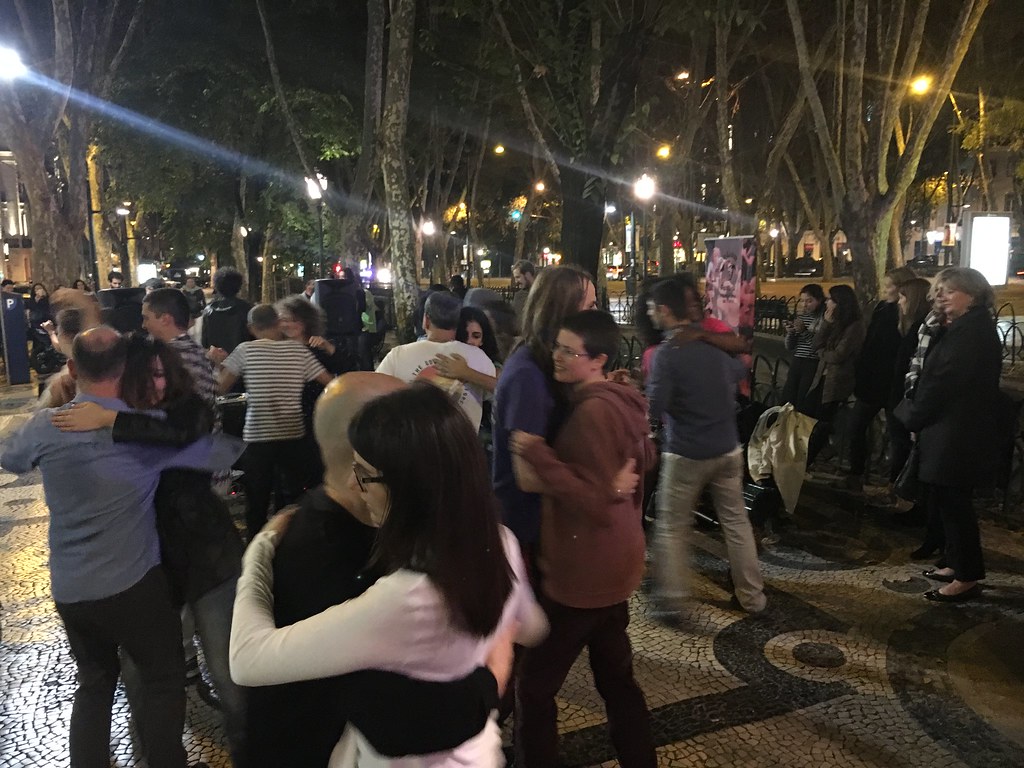 Forro in the Avenida

Forro is a partner style from Brazil, danced close with fast foot work and lots of turns. It can also be slow and sensual. A Kiwi couple I met through the European blues scene and now living in Lisbon, invited me to dance forro one Saturday evening. The Espaco Baiao forro party ran from 18.30 till 22h, on typical Lisbon mosaic pavement, in an avenue of magnificent plane trees.

I got there before my mates and met Jorge, a memorable face from the Mash Up. He has Mozambican and Macau heritage and is a great dancer – blues, forro and other styles besides. We chatted before the DJ came on and we were the first couple out on the floor. I stole a dance with the DJ, who is also a teacher. He was awesome – bringing great music and a serious stereo PA and twin-deck CD setup to this free street party.

It was a friendly scene and I was able to score two or three dances with each of my favourites ... a guy called David with a shiny black mane of hair lead with supple body isolations, snaking us across the stones. My Kiwi friends Tara and Michael also lead with subtlety, warmth and skill. A French guy called Vincent, and plenty more random good dancers, from young to middle aged ... and one shy beginner who was not bad at all. It warmed my heart to see beautiful people in many shades of white, brown and black ... all dancing and having fun.

On Sunday at Mirador Puertas del Sol, I danced swing overlooking the river and the sparkling lights. When I heard the lyrics of this song, I laughed out loud.