My Cuban friends Pablo and Vanessa picked me up at my B&B on my fourth night in Cuba. We caught a taxi collectivo to Havana Vieja to meet another friend. Then the four of us walked a few blocks to a dance bar, called Jager Bull. 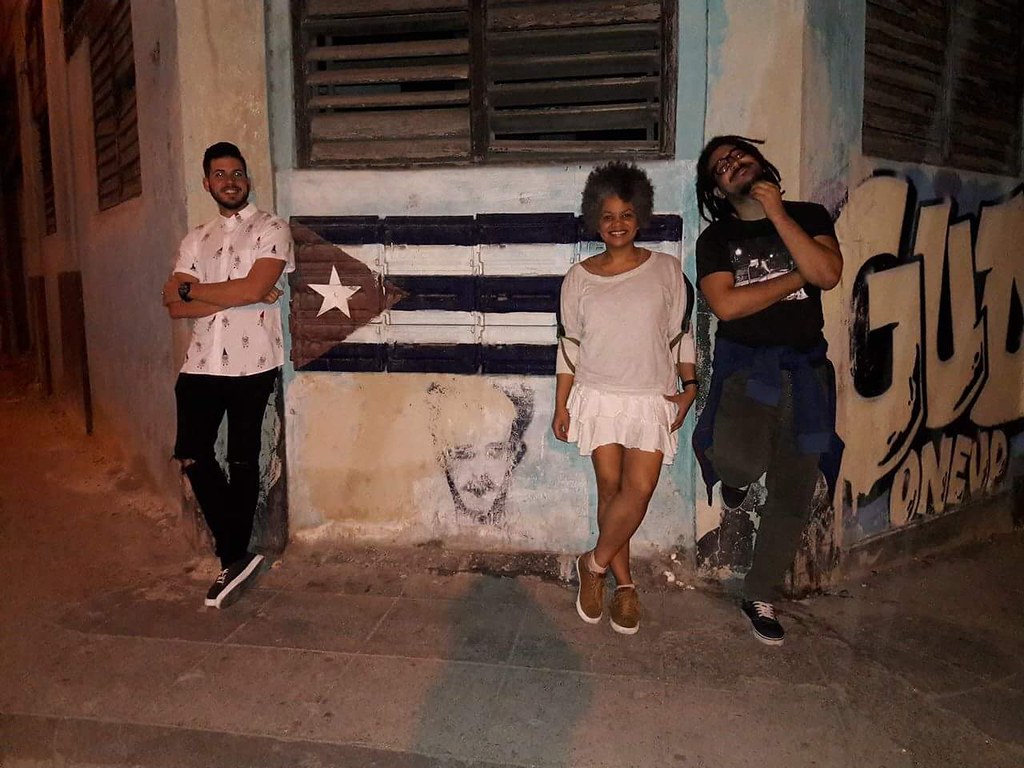 The interior was minimal white, animated with multicoloured spotlights. Sexy salsa dancers loomed over the room in a huge wall projection. I ordered a round, including virgin Pina Coladas. These were the real thing: coconut milk, fresh pineapple – delicious!

A few dark-skinned guys busted out synchronised dance steps. We had fun copying their hip-hop/ Afro moves. One of them greeted us, introducing himself as Andy. He danced with me a few times – mostly salsa – and taught me a three-count step in another style. The other dancers were not as friendly, but most said yes when I asked for a dance. 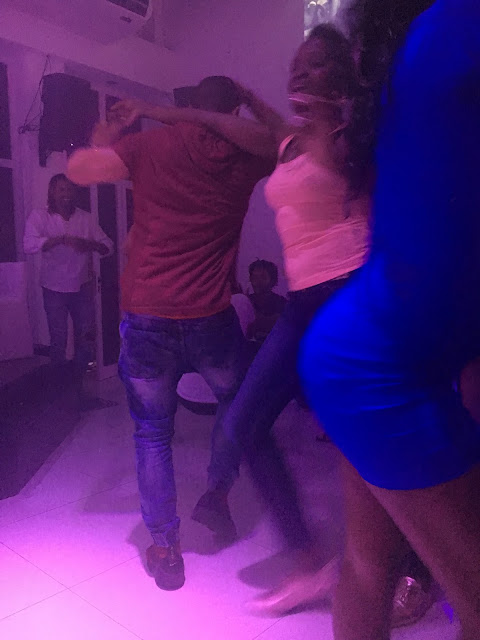 I noticed Jean’s metallic pink shoes first, and then her warm smile. She was slender and tall, her face dark and lined. I sat beside her and said hello. In French and Spanish she told me about her life: she was born in Cameroon but spent most of her life in cities like Paris and London. She has bought a large house in Havana, so that she live cheaply on her French pension and invite family and friends. She lives 3 to 6 months a year in Cuba and the rest of the year in Paris.
"Do you like it here?" I asked.
"Every country has its advantages and disadvantages," she said. "Here I can live cheaply, enjoying the warm weather and the dancing."
I said, "Yes it's cold in France now. But as a foreigner I'm finding it quite expensive here."
Jean said, "Food can be expensive, but my monthly electricity bill in Havana is €6."

I had quite a few good moments with Jean, shaking it on the dancefloor. Later, we watched Asian and European hip-hop dancers practising energetic choreography on the big video display.
"That's how they used to dance in the village where I grew up," she said, "shaking, shaking! And now it's all in fashion, all over the world. Its very good for you."
“Yes, indeed,” I said, sharing her pride in African diaspora culture. 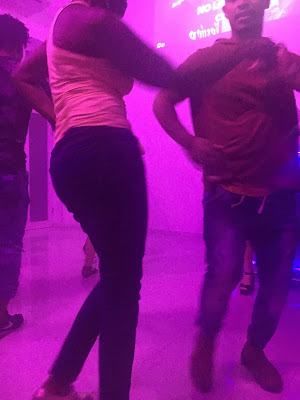 Jean pointed to one of the young men at another table and said, "He's my Cuban son."
I probed a little to understand what she meant.
"He lives at my house. I have adopted him and his family,” she said. "He's a taxi dancer, women pay him to dance with them. He's working tonight so has to give at least half his dances to his client. He shares the rest with friends.”
"How much is it?" I said.
"€25 for a couple of hours."
He had declined to dance with me – now I knew why. He soon invited Jean to dance. She came back saying proudly, "My son is a good dancer, isn't he?"

This was my first encounter with ‘taxi dance’ culture on my journey around the world. I later learned that some Cubans see this kind of service as a grey area between dance and prostitution. Probably the taxi dancer is like the masseur in that respect – some provide ‘happy endings’, and some are hired for their art and skill only.

It was a pleasure to meet an older lady so full of vitality and resourcefulness. She is a friendly retiree with a large house, who loves to dance and is well-connected in Havana and Paris ...why did I not take her phone number? What happened is, I got anxious. Jean kept sitting closer and closer to me and my bag with my phone in it. Cubans had been telling me to be careful, don't trust. Every time I looked her way, Jean was sitting there, smiling at me. I started to suspect her motives.

Anxiety and tiredness nibbled at me, then boredom. The exciting dancers were keeping to themselves and the huge video wall was dominating the room – at times, all eyes on the dancefloor were turned up towards it. It was midnight and my legs were hurting. I told my friends I was ready to leave soon. Within minutes they were ready take me home. After I changed into my street shoes, I only had time for a quick goodbye with Jean. She gave me a kiss and said,
"Thank you for your company. I hope we meet again."
I said, sincerely, "I hope so too."
In hindsight, I believe my worries were all in my head. I regret not taking Jean’s contact details – she was cool!

Most of my companions stayed in the club, but Pablo accompanied me all the way home. He would not even accept taxi fare for this round trip. Over the roaring, smoky engine in the taxi collectivo, I thanked him for his kindness.
"Any friend of Nori is a friend of mine," he said.
We talked about the challenges of starting a new life in a new country, like Nori is doing in Madrid. Nori and I had a explored Madrid parks and art galleries together: Retiro and Reina Christina. We had visited the Picasso masterpiece, Guernica. Familiar with European cities and customs, perhaps I was a guide for Nori. Out of this connection in Madrid, new friendships were blossoming.
"Next time you're in town, we will cook a family dinner for you at my dad's house." said Pablo.
"I would love that." I said.

It was five blocks walk from the taxi collectivo drop point at St Lazaro to my B&B. As long as the local families were sitting in open doorways and peering over balconies, Basarrate felt fairly safe. Now after midnight, apartment shutters were down, restaurants were closed. The street stretched into the distance, apparently deserted. Faint arc lights high above gave the treeless concrete landscape a muddy sepia tint. At the second block, we passed a group of teenage boys sitting on a doorstep, gazing at a mobile phone. A block further on, two men stood in the shadows and stared at us as we passed. I was very glad of my big burly companion. When we finally reached my block I fumbled for my keys while a man stood across the street, watching us. Apparently at this time of night, the street belongs to men. We hugged goodnight and Pablo began the five-block walk to get a taxi to back to the nightclub. I took the stairs up to my apartment, grateful for Cuban friends who had opened the heart of the city to me.