On my first visit to Madrid, I wrote about exploring Lavapies Tabacalera by day – sophisticated art installations in warehouse galleries. On this second visit to Madrid, I discovered the Tabacalera studios by night – a living, breathing art community. Cuban flautist and poet Liz stayed in touch after our chance meeting in Lisbon, and joined me for this contact improvisation adventure. 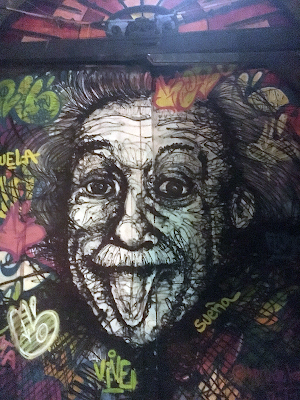 Tabacaleras are former tobacco factories, given over to the arts by many Spanish municipalities. Passing through the unmarked portal into this furnace of creativity, I quickly felt relaxed and at home. Liz said she had never seen anything like it it. To get the dance studio, we traversed a cavernous room of giant murals into a corridor of spectacular street art, past booming reggae and African DJ dens, out into the yard. A few oil drum fires burned, and people gathered around to keep warm, under the gaze of Albert Einstein. If only he could see his two-metre high portrait, spray painted on old wooden gates... he would laugh at the cheeky reflection with its tongue out.

We entered a building called Molino Rojo (Moulin Rouge) and passed through the circus room with its hanging trapeze. We arrived in time to witness the ritual cleaning of the studio floor. Liz had never tried this dance style and said she felt shy. She gave me a reproachful look when I said that I did not know anyone here. “It's just like any social dance,” I explained, “You don't need to know anybody. And we have each other.”

Liz and I joined the guided warm up in Spanish, which emphasised core strength, supple spine and connection with the floor. The lead dancer talked briefly about etiquette, the collaborative nature of the space, the weekly cleaning and the pack down. Then about 20:00, he turned turned on emotional, downbeat music and turned down the lights.

Liz sat and watched while I joined the jam. I connected with a novice female dancer. After that first dance, it was surprisingly difficult to connect with these strangers. I invited Liz to come and join me. Whispering, I taught her some basic moves and safety. After a few minutes, she looked a bit lost.

I said, "To simplify, you can concentrate just on this kind of touch."
We were sitting on the floor and I slid my arm along hers. "I'm going to cry," Liz said.
"You can cry," said I, and I gave her a hug. "If you cry I'll cry," I said. We hugged and cried for a short few minutes. It was sweet. Then we continued dancing. Liz started to enjoy herself. "Es muy rico," she she said, rolling over my belly as she started to understand body surfing.

Fair play to her, Liz really gave contact improv a proper go. When Liz tired of this new and intense experience, I continued on my own. My next dance was a fluid series of spirals over and under a very supple man – fun, but his pace was too fast to vary and explore. Liz waited patiently beside the dance floor, despite the cold. When I asked if she was okay, she said that she was enjoying watching the beautiful dances. Certainly there were some advanced moves playing out, quite a lot of aerials in the confined, dynamic space. 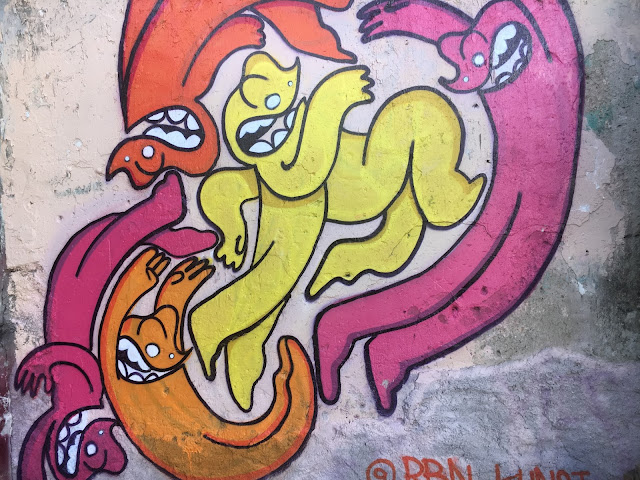 There was too much cliquey dancing, people sticking with their favourites. No one asked me to dance and no one really welcomed us. It could be that they get a lot of new people, and take a while to extend the welcome. Probably half the guys I asked, did dance with me. As it was the fastest, tightest social floor I had encountered, one hour was enough.

We got our shoes on and winter woolies, and stepped out into the corridor. Passing through a room full of jugglers we went to warm ourselves by the fire in the back yard and take photos of the murals. On our way through the main building, I could not resist the sound of dancehall reggae booming from a den of bass bins, decks, and posters. A bunch of mostly black dudes, who would have been scary on the street corner, somehow were not intimidating in this small, booming room. It looked like a practice studio session for DJs and MCs, rather than a party. 21.15 on a Friday is too early for Madrilenos to go clubbing. There were about eight guys altogether ... a few artists behind a wall of sound gear and decks, a few standees, a few dancers, a few sitting. I don't think they even had beers or weed. Anyway, party or not, I answered the call of the baseline without hesitation. Game as ever, Liz joined me for a boogie.

I busted moves vigorously, in happy nostalgia for my dancehall reggae years. Dancehall is a raunchy, sometimes playfully aggressive or clownish dance from the West Indies, my mother's homeland. The dance and music share West African roots with Calypso, Lindy Hop and Blues. I enjoyed this overlap, mixing and modifying solo jazz steps to the bass-heavy, rugged rhythms. I did the Willy bounce, Susie Qs, Running Man, and some big kicking, hopping turns based on Charleston. I did Heel-Toe (rowing the boat), the Pepper Grinder, twisting heel grinds, Mooches, and figure 8 hip grinds. I did knee popping, hopping turns based on Shorty Georges, and plenty of body rolls. I did upper body moves too, like lassos, shimmies, shoulder roll-downs.

There was window onto the corridor. A few people leaned in smiling and watching us, then dancing in the corridor themselves. As the energy level in the room rose, a few emcees took turns on the mic. I could feel an exchange of energy and good vibes with them too. In Arabic there is a word for the dynamic between musicians and dancers...'tarab.'

We were outnumbered by men. One or two guys flirted with us on the dance floor. One of them complimented my dancing and asked for a date. When I said no, I'm not from here, he got annoyingly possessive – I had to ask him to leave me alone. African origin guys seem to appreciate me (and harrass me) more than white guys. I probably should make an effort to get to know them... but in this pounding noise and excitement, I can't be bothered trying to make conversation. Some of these guys were good dancers, skanking, turning out knees and lifting their feet in a rhythm that was hard to copy. With them I exchanged smiles and grooves, but no touching. I did not dare to do the classic dance hall 'rub up' or grinds against men's crotches, although the invitation was there. I just don't have the guts to do it with strangers like I've seen some women do. Surely its a good way to get your flirt on, but its so showy and sexual ... it seems to bring out the Irish Catholic prude in me! Dancehall has a lot of provocation and teasing, but that's one dance move that I can't find a non-sexual use for.

Two women joined us dancing for a while, one white, one Indian. All the while, Liz was quietly grooving away in the corner, little steps, little smile. I linked arms with her, promenaded her across the floor and finished with a Mess Around. I think we stayed about an hour... as long as it took me to take off jackets and jumpers and work up a sweat. I felt a love for these people. I wish I could go back there every week. I want to have this place on my doorstep.

As we waved goodbye about 22.30, I wondered what would happen if I lived here ... could I get to know them? Are they really friendly? Looks can be deceiving. Still this was my first time feeling connected to a group of African men since I started my travel. Across the hall was another studio jam, African music booming. Ahh so great! Music is such a vital bridge.

"Me encanto" said Liz, as we stepped into the cold street. "I can't wait to go back again. This whole night has been magic. Meeting you was magic."

I thanked her for coming and gave her a hug. What a pleasure to explore the city with someone equally new, musical and curious. Our night of dancing in a hidden creative factory with random DJ jams, had totally exceeded my expectations. We strolled in Lavapies and gradually came down from our little cloud. We agreed that the nightlife around us seemed slow, colourless and boring after the Tabacalera.

Liz's happy mood persisted. She told me about her latest music video and how she is building her social network to find gigs, and clients for her flute lessons. She remembered some safety advice I had offered during the jam. She found in my words a more poetic, philosophical meaning – a metaphor of her life as an immigrant, starting from zero, alone in a strange new city.


"Dance is like life... you can play, but when you fly, you are responsible for your own weight."

Jax said…
Sounds like you are having a wonderful time Dee! Enjoy xx
10:40 PM