After a few days hermiting indoors, working on tour logistics, I was due for an outing, a day of tourism and sunshine. The Camino de Santiago beckoned, but I decided not to risk foot pain and bedbugs on this dance tour! And while I eyed the canoeists with envy, no canoe was available. Finally, I found an affordable local bike rental. 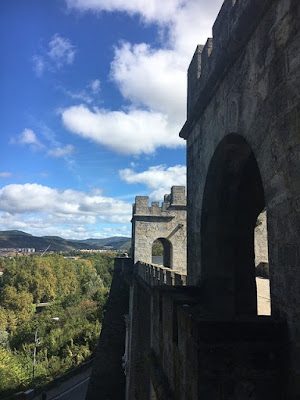 Everything is near here... it's a small town with a great design. I've never seen a town map with so much public green space, except maybe Geneva. Most of the river bank is a public park, part of a 33km nature corridor on the river connecting several local towns. Development of the riverbank is also naturally constrained by steep cliffs running along one side for several kilometres. Pamplona is at the top of this cliff, with parks and city walls offering expansive views over suburbs and pine forested hills.

In medieval times, Pamplona was the capital of the Kingdom of Navarra, a region that still enjoys some autonomy to this day. The town's medieval stone fortifications are so wide, you can lounge on lawns atop one section, looking down on lawns and walls below. Humans have been building walls for a long time... it's not the most innovative defence idea, Mr. Trump! Thanks to institutions like the EU, medieval walls now are charming old pieces of landscape that we can enjoy in peace.

Near my B&B lovely Media Luna Park features a beautiful chunk of wall, and a glass elevator drops down to the riverbank below. A few times I practiced yoga here, under plane and chestnut sun-dappled trees, in elegant autumn colours. On my second day with the bike, I rode about 25 km round trip along the river. I passed historic stone bridges and mills, bountiful market gardens, pine forested hills. There were also soulless modern apartment complexes, highway underpasses and industrial zones. Most of these areas were saved from total banality by colourful energy of street art. The smooth, easy track was not busy... just enough joggers and hikers to make it feel safe. I saw a red squirrel on the way, and a few eagles. A golden one.

It was curious to come upon a bridge named Trinidad de Arre. I wondered if the inhabitants of this quaint village on the pilgrim trail of Santiago were among the conquering forces that wiped out the native peoples of the West Indies and profited from slavery? This violent history so easily forgotten... it was the Spanish that first colonised my mother's island: Barbados. Later I realised that Trinidad just means Trinity. It's a word from the Catholic tradition... so probably is used all over Spain – not much use as a clue to the origin of those Conquistadors.

After 12 km rolling along el rio, I reached the tiny village of Sorauren, hungry for a hearty lunch. The popular, unpretentious restaurant on the river did not disappoint. I had three giant, white asparagus spears, a small serve of paella and a local sheeps yoghurt for dessert... all for €13 including beer. Best value meal of this visit to Spain so far. 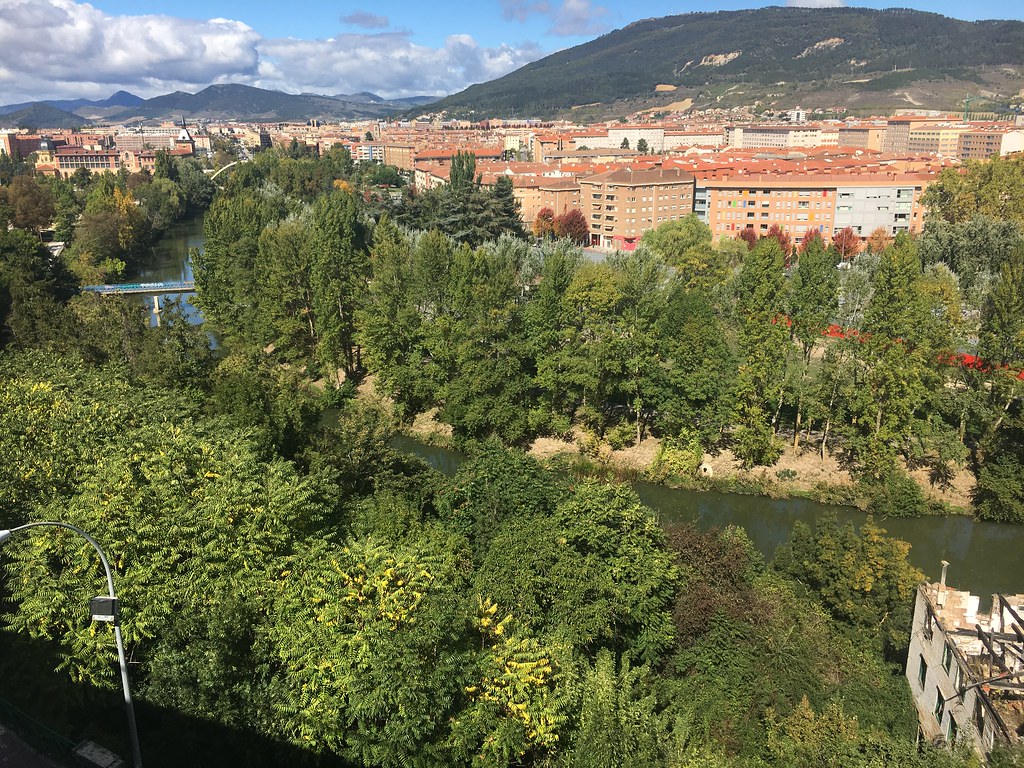 I haven't liked the cuisine much since I arrived in this northern part of Spain. The salty, oily bar food drove me into the kitchen to cook for myself. Yesterday in another riverside restaurant I spent €13 on an unsatisfactory two course meal. The menu itself was strange -- there were a lot of raisins. 'Spinach and cheese' crepe... with raisins? On request, they were able to omit the raisins. But the plain bread rolls had more flavour than this crepe, with its spinach swimming forlornly in a bland bechamel.

Next was an equally bland and very unattractive fish. It looked two lizard-tails or snake-ends. White, muscular, sinewy flesh tightly attached to a strange tapering spine. Are these the creatures that inhabit these murky green waters? More than eating, I enjoyed watching a heron stalking, his long neck snaking, telescoping and stretching surreally. And the waiter was nice... gave me a whole bottle of wine after I only ordered a glass. Perhaps it's because I was their only lunch customer that day. Not that I drank it of course, but a nice touch!