What an adventure... encounters with strangers, soon to become friends. There were so many happy moments at Drag the Blues festival… dancing by night, exploring Barcelona by day. 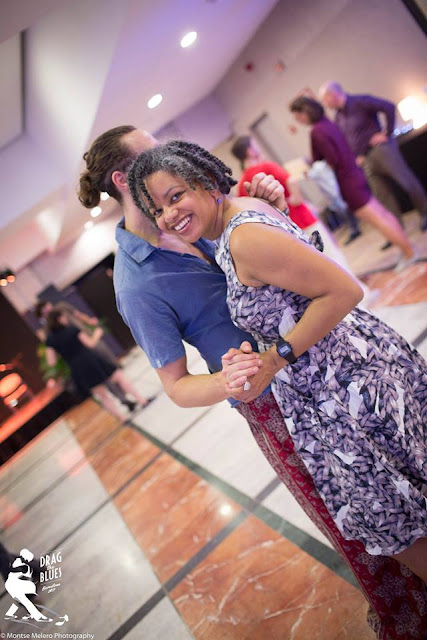 The highlight of the first night was the after-party at TeatreNeu... a cosy two-storey bar with large, airy wooden floors. Dreamy dances happened here. I teamed up with dancers who would be free in the daytime: my lovely Californian roommate Dana, Neil from Bristol, Amy from LA and Mauve from Toulouse. The next morning, Neil came over to drop off some luggage. As Dana is a masseuse, we had discussed doing exchanges the night before. Massages got the day off to a great start, and set the tone for a warm, physical connection that grew as the weekend went on. Arm in arm with Dana, we strolled down las Ramblas, admired a few Gaudi facades, and found a laneway terrasse for lunch.

There has been a municipal crackdown on the buskers, so they still play – but only very short sets before moving on. Barcelona's al fresco diners are a tough crowd ... not even a clap, much less a dance. While we waited for our food, Neil and I got up and danced to a Latin tune, guitar and voice. The busker was buoyed by our dancing energy and he returned it, with smiles, compliments and another tune before moving on. I danced solo to a gypsy trio, but they were strictly business... only interested in our money. After lunch we continued rambling las Ramblas, ending up in the Zoological Gardens. Neil, Amy, Mauve and I lay in a heap on the damp grass, resting our tired legs. 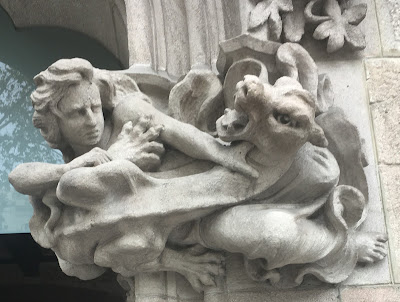 In the evening, Neil went for dinner with Mauve and I found a great little bar. I was lucky to join two other visitors dining there... a dancing couple from Germany now living in Genoa. Later there was dancing till the wee hours, in hot rooms on hard, sticky floors. Not ideal... first night venue was better! But plenty of talent, many familiar faces from the European dance circuit. People had traveled from as far as Copenhagen, Ukraine, USA and beyond for Drag the Blues. And a duo called Salt and Soul transported the fusion floor to a place of bliss.

The next day, Neil and I met at Park Guell late in the afternoon. Instead of going through the paywall to see the Gaudi mosaics, we climbed the woodland path towards the high ground. We found beautiful views of the city right to the sea and even better, we found buskers.

The flamenco guitarist with the flying fingers cut a romantic figure, with his back to a stone wall and a serious, almost pained expression. His fingers were burning, but we asked for one more. We danced through a song and applauded him. He applauded us, smiling broadly. Again he played, we danced... his rhythms were complex and improvised, so we had to be creative and free. At the end of the tune, the guitarist said, "Thank you so much. This is the best thing that has ever happened to me here."
It was quite an emotional moment. Perhaps we should have given a hug but instead we thanked him, dropped coin in the guitar case, and wished him a good evening. 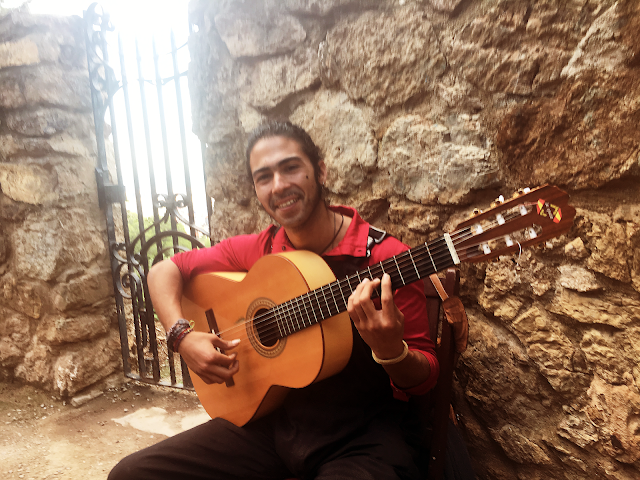 At the very top of the hill at Parc Guell, we found three European musicians playing West African polyrhythms on the balafon, gourd harp and cajon. Again we danced, small and close at first, then circling the musicians, then big and wild. Neil is a great dancer, and in fact he had won the 'crazy' blues Jack & Jill. No better man for the challenge. We switched roles, exchanged ideas... even had some fun with arials. It was getting close to dinner time when we headed down the hill to pick up our bikes and get ready for a night of Blues dancing.

Later that night at the party, I plopped down beside Neil on the floor cushions to rest.
– Glitter suits you, I said.
– The woman who gave it to me said I was a very beautiful man, said Neil.
I tried to remember the last time a man had given me such a compliment.
– I was told that I'm a beautiful woman by a taxi driver who ripped me off.
– You are a beautiful woman, Neil said.
I mumbled something incoherent in response. Neil asked me if I had any blues crushes. I thought for a second.
– I might have a crush on you, I replied.
– Awww, said Neil.
I did wonder if this would make things awkward, but surely it was obvious by now anyway. He had a girlfriend. He had been telling me about girls he fancied... so presumably I was not one of them.
I continued, "There's a few people I could have a crush on, but I don't want to put energy into that...."
"Of course not, it's just for fun." he said. Maybe it's a long time since he's had a proper crush. They drain alot of energy.

We talked about dancing how the dynamic (or lack of it) can make someone more beautiful, or less... Our conversations were earnest, honest, and increasingly deep. We talked about NVC, about beliefs, values, and daily self-help routines, identity, art. Also about kink, tantra and other kinds of bodywork, play and healing. Sometimes it was good to be pulled out back out of our cerebral, intense discussions into the present moment. This conversation ended when a dancer came over and playfully demanded Neil's presence on the dance floor.