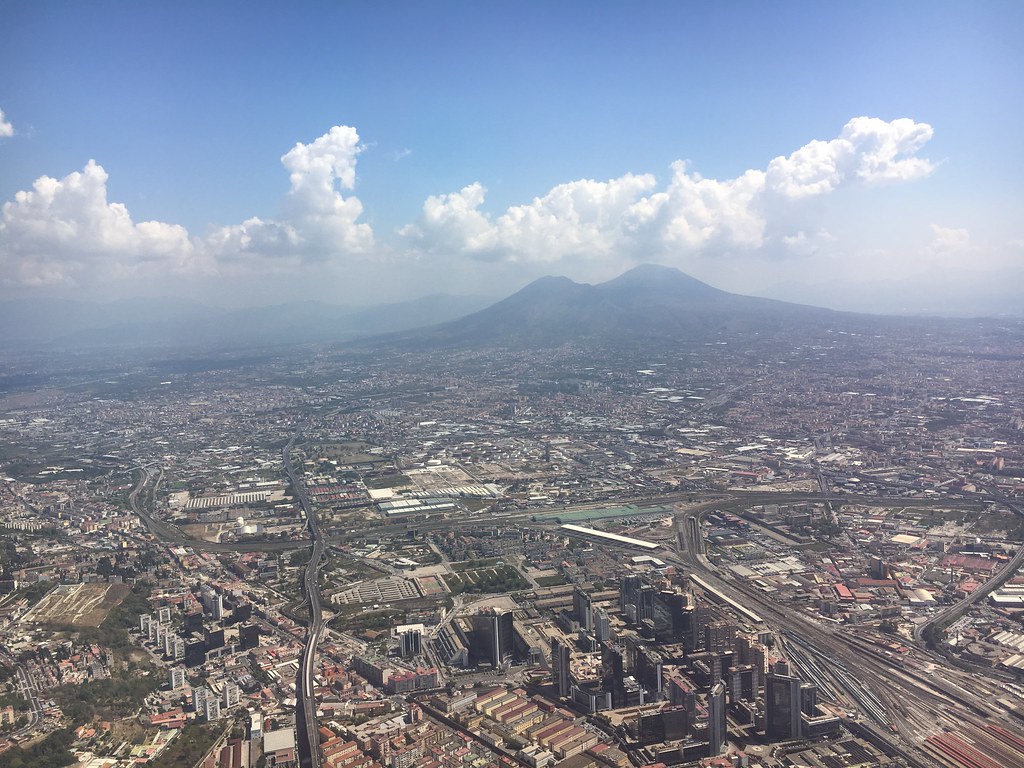 Napoli to me is a dystopia of urban dysfunctionality. Huge historic buildings with impressive architecture and hollow, unglazed windows loom over the streets, surrounded by high fences and piles of rubbish. One such monumental edifice is near my B&B – a former 'Paupers Hospital', is fronted with a row of palm trees... an architectural carcass as wide as a golf course. Wasted infrastructure abounds. Even the Royal Botanical Gardens only opens on weekends... the rest of the time nothing is visible but a high wall topped with plants, and a very spiky barrier. Urban paradise lost.

The city stinks.... in some places it's the abundant dog shit that dominates, usually it's the traffic fumes, mingled with the hum of overflowing rubbish bins. The traffic is loud, aggressive, chaotic and very inefficient. Smarter Italian cities minimise vehicular traffic through narrow historic streets, allowing cafe culture and commerce to flourish. Here pedestrians, mopeds, ambulances jostle for space, in a cacaphony of car horns. The city has a raw energy to it, like a movie on fast forward. Three boys are travelling down the street in a slalom of kicks, dodging scooters, prams and shopkeepers to hone their football skills.

After being stared all week in a country town, it's nice to go unnoticed... or almost. As I walk down the street, a middle-aged man stops dead, almost in my path, piercing me with a blue-eyed stare, turning his head to follow me as I walk by. I guess this is supposed to be a compliment but it's creepy. About 10 paces further, I glance back. He still hasn't moved, except to follow me with his gaze. With as much disapproval as I can muster, my eyes meet his and then I'm on my way.

Italian rave about Neapolitan pizza. I found a famous pizza restaurant but it had a massive queue. Very hungry and in a hurry, I discovered the worlds worst pizza right next door ... a soggy and flavourless doorstep of dough.

Deeper the historic centre, a few leafy piazzas off via dei Tribunali look inviting, buzzing with diners and drinkers. However, I had promised my host I would be home for dinner at 8pm. I increase my pace, and start to loop back towards his neighbourhood. Not wanting to be late, I was relieved when I saw the taxi.

Where are you from? The driver asked.
--Ireland and Barbados.
Compliments! You are a beautiful lady.
--Thank you.
Do you know exactly where you are going?
I repeated the address. He had said 'minimum charge'...I knew it should have been 5 minutes, maybe €6 -- but driver pretended to misunderstand the address. He took me on a massive detour tour through alleyways to the wrong street (vico, not via) and asked directions of three people, as if maps had not been invented. I could not see the taxi meter. Finally arriving, he dropped me at the far end of the street because it was one way, and charged me €13. It was probably quicker to walk. Oh well, I consoled myself, at least it was not a violent robbery. A ripoff with compliments.

My host, C. welcomed me back with a slice of pizza and a glass of wine to nibble on, while he cooked the pasta. I now fully understood the value of his habitual offer to collect his Airbnb guests from the train station and drop them to the airport. After my brief excursion in the intense, anonymous crowds of Napoli's dirty, noisy historic centre, I was also looking forward to company over dinner.

I did anticipate a slightly awkward dinner conversation because of our language barrier. I can understand almost everything C. says, but I have to resort to Google Translate (GT) in order to reply. What did I think of the situation in North Korea? 'Complicado,' I said improvising from Spanish, before typing a few sentences into GT, for a fuller reply. It was not long before C. was telling me about failure of his marriage after 25 years (divorced 3 years ago), and about his children and their careers. A big lifestyle change for you, yes?
Yes, he said. Not so much for her, she had stayed in the family home, with the young adult kids.

Then followed questions about my career, where I'm from, my marital status (never), my children (none). Awkward indeed. This Airbnb experience was starting to feel like an internet date. I feel sorry for my host. With his intense attention to guest logistics and desire for dinner company, he seemed lonely, needy. After dinner he rang his daughter, told her all about me and handed me the phone to say hello to her. Me, a guest of one night. I greeted her warmly, told her I was full of pasta.

Later, I shared the sofa with C. I sat as far away as possible, writing in my diary while he watched TV. He asked what I was doing... "Diary, journal,"I said.
Am I in your diary?
"No."
He made a fuss,"how are you writing your life and I'm not in it?"
"Maybe later," I said, glad to be leaving soon... I want this flirting to end.

The one common theme with all my Italian experiences has been generous hospitality, pleasure in welcoming a stranger at the table. His apartment is quiet enough on this backstreet, and comfortably furnished, but looks out onto other high-walled apartment blocks built much too close. Privacy only with curtains, or you will look across straight into other peoples lives. Worst of all the building lacks any contact with nature ...not even a tree is in sight. When apartments are built with poor planning controls or strictly commercial interests, their convenience is not balanced by green space, light, air, or a feeling of community.

Italy has many great, beautiful cities that I would be happy to revisit, despite their typical Italian issues -- litter, illegal dumping, macho boys on squealing scooters doing wheelies. Some say one night is not enough to judge a city by. But after an hour in your streets, a trip in your taxi, a night with your citizen... Napoli you have been judged. I'm not sorry to be leaving tomorrow. This is a city best enjoyed from 5000 feet above.