In a small town where people-watching is more popular than phone-watching, its seems I am the most interesting item of the day, week or month. The staring is familiar from my childhood in rural Ireland, in an era when emigration was more common than immigration. I could go for a year without seeing a brown face other than my mum or brother. You never really get used to being stared at, but my style comes from an expectation being watched ...so why not turn up the colour?

Walking alone in the historic centre of Montescaglioso, I wonder when was the last time they saw a black person. The curious, blank stares of old men and women. I greet them politely, I get a polite reply. The unwavering, objectifying stares of a group of men outside a bar or going by on a truck. I ignore or stare back. Kissing noises when I walk by. At what age they learn to relate to women this way? Its intimidating, but people don't lock their doors here. I feel safe enough. And did I mention the baby stares? But they're cute... and it's fun to stare back, make faces and wait for mama to turn around and see what's going on. It's totally different when I walk with a friend, or a local. People may stare, but the stares bounce off.

Despite people staring, and long nights sick with a hacking cough, I have really had a wonderful time in this Italian town, mainly thanks to my beautiful host family. Their hospitality is so warm it can only be described as loving. Also, we have similar interests and values. I can't believe my luck.

Earlier in the week Francesco and his son took me to an ancient stone shepherd's station at the top of a ravine, for a night of live music and cinema under the stars. Today Elizabetta served me her home-made orange cake, marmalade and peach gelato for breakfast before throwing on a CD of local taranta folk music and dancing with me. Then Francesco and Elizabetta took me fruit picking down the road about 15 mins, among olive groves and vineyards. We picked the prickly fruit of cactus, long dark pods of carob, delicious figs, pears. The almond crop is poor this year, maybe because the bees were affected by climate change ... but my first almond direct from the tree tasted amazing. We came home at lunchtime enjoyed the E.'s home-made whole-grain pasta, her home-made pickles, and amazing aubergine 'steaks' topped with scamorza soft cheese and tomato sauce. An ordinary summer day for these lovely people!

Yesterday evening in the village square there were more 20-something people than usual and less of the usual staring. A guy called Rocco started conversation and turned out to be a graphic designer ...he took me across the square into his uncles studio ....amazing poster designs for cultural events festooned the walls. Rocco shared some of the stories of these posters and local history with me. Then with his friend Silvia and his dog, we strolled around town walls, enjoying the views down over the valley. He showed me a hidden cellar door belonging to an abbey, where the monks used to keep their ice cubes, and where the Nazis hid sometime during World War II. So many stories here in the walls, so many myths.

My new friend is the named after Rocco the local hero saint. St Rocco's statue dominates the town square, and I just missed the annual festival in his honour on 20 August. Legend has it that Rocco saved the townspeople from an earthquake or possibly from the epidemic that followed the earthquake. 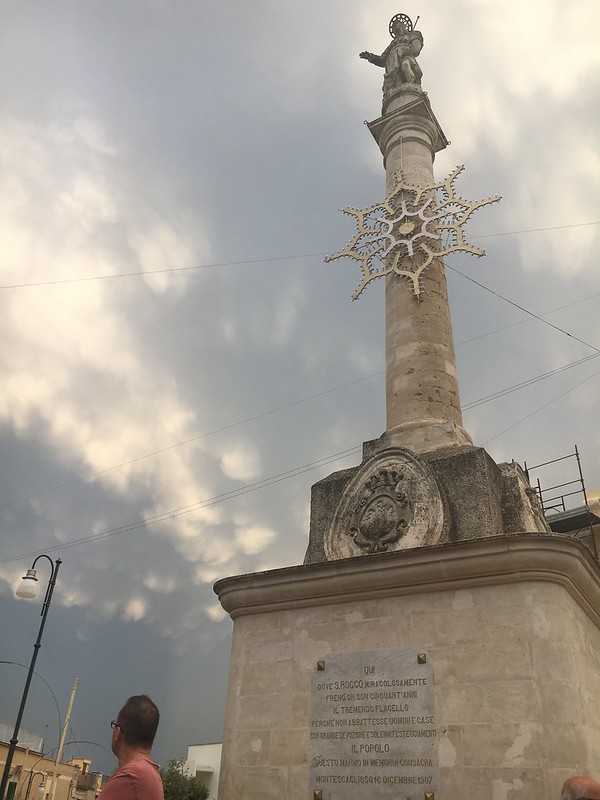 When we were sitting in having pizza a bunch of tween age kids ran by, dodging and weaving through the narrow lanes. They looked innocent and happy. Rocco said 'they can be dangerous, especially if they know where you live'. When he was their age, their posse used to pick on individuals sometimes ...water bomb or throw paper at them or taunt them. He only realised later that this was mean.

I told them that that I had been harassed for my grey hair and I had worried that they would throw stones. Sylvia, Rocco's friend told me she had been sitting on her balcony with her feet up and the kids yelled at her that her feet smelled. Innocent fun, i guess, if no stones get thrown. Rocco walked me home with a whole bunch of his friends.

So by the end of the week I had an interesting and unlikely local posse: young local designers and musicians. And the affectionate and fun host family of Betta and Francesco. No wonder I'm sad to leave...