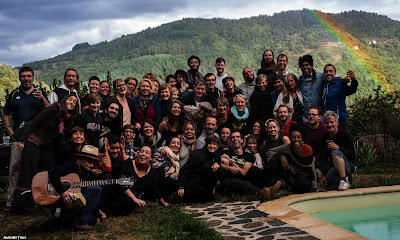 "You were a smile with a person attached."


When he saw me arriving at camp, Dan Nash said he knew something had changed in my life. Dan has also made big changes... after a near death experience at a gig in Berlin, he's moved from the UK to Spain.

This dance camp is so beautiful. Between drinking, eating and sleeping, everyone is dancing, playing music or singing, in a lush, peaceful mountain retreat. Dramatic peaks wreathed in cloud, fragrant lavender, kissed by bees and butterflies, kittens playing ... ahhh.

Tonight I felt really connected. I spent about 2.5 or three hours preparing my 1hr DJ set. I checked in with Mr Nash about my idea of warming up with calypso, reggae and hip hop, because the blues scene has a lot of purists and I haven't heard these styles aired much. Annette had been a bit skeptical /cautious about my idea.

Dan reassured me 'if you won't dance to reggae, you don't deserve to have legs'. He advised that I steer clear of electronica -- use music with instruments, Americana. Good. I was on the right track: playing alternative  african /roots/diaspora, while avoiding 'fusion' aesthetic.

My DJ set (first of the night) went really well... built up from a dead, empty room to everyone dancing. My alternative tracks got the most love. Compliments from Gabby, Helena and Anuschka. She said my music was powerful, different. My set list ran smoothly with no alterations needed, so I could dance to most of it. Lovely dances w Gabby, Michael and Paul. And later, the little doctor lady, the bearded Spaniard, Dan Repsch. I was able to smoothly transition from my set to dance performance tunes. Happyfeels 😊

It was Mr Nash's night off. Mauve from Toulouse gave a great performance of vocal and piano... vulnerable, rich and personal, including a song she wrote about her mom. The whole room felt connected.

Other highlights from the camp – this poolside party, featuring real live rainbows, and a beautiful dance with Paul, captured in video by Anuschka. She also took the group photo under the rainbow.