Like most migrants she brings to a her new home the energy to realise all of her hopes and dreams.

I saw the distinctive silhouette of Michele's twisted Afro hair, and our eyes met as I walked past her Jamaican restaurant.  The next day I popped in to say hi. Straightaway there was a friendly recognition ... she is from Jamaica by way of New York. I am from the neighbouring island of Barbados, by way of Ireland, USA, Australia.

A stocky woman (in her 50s?), M had beautiful smooth golden skin, full lips and huge green eyes behind black-rimmed spectacles, her hair dyed dark plum red. She said she would like to have hair like mine one day. We talked about the benefits and challenges of having natural hair. M. said she was done with straightening. Natural all the way. 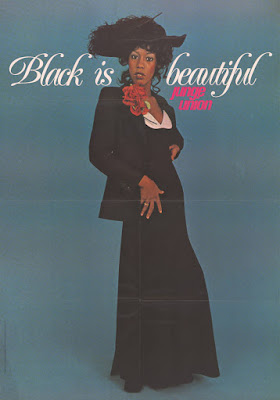 You know your people are oppressed when their default position is to use expensive chemicals in order to resemble the dominant social group or their standards of beauty. As some women need plastic surgery in order to feel good enough, many African diaspora people take drastic measures. In African cosmetic shops, skin bleach sits alongside the toxic straightening perm packs. Self-hatred, $25 a jar. And it's not only women... look at poor Michael Jackson.

To be very honest, growing up in a majority white society, even I thought black people were ugly. Gradually this changed as my horizons expanded and the world turned on its axis. And cosmopolitan Western cities, this attitude is on its way out... probably thanks to the power of diaspora culture: jazz, funk, hip hop, reggae. 'Black is beautiful' was a slogan from 1960's and 70's USA, building on the progress of the Civil Rights era. Not invisible, not ugly. Advertising is still very sexist and Eurocentric, but seeing black models and stars in glamourous ad campaigns gives me hope. I still can't buy most women's magazines though... they are vacuous, demoralising and irrelevant.

M. said Jamaica had been growing more rough, suffering the worst of excesses American culture: guns, crime, high death rates among you men. She had lived in the USA for a time and now she's in Bali, employing locals in her new Jamaican restaurant. Business is tough, she said. I can see why... M. has a very niche offering on a strip of very competitively priced eateries. Unlike Michele, they can rely mostly on local produce.

Michele and I discussed how people with our post-colonial ancestry end up scattered and stretched around the world. She lives between Bali and Virginia, with a stepson in Denmark. I can claim three continents, or more, not even counting my scattered family.


We are mongrels, she said.

'Beautiful mongrels' I said. Our Afro-European looks are a point of difference and connection at the same time ...it can be isolating but there is also recognition, like sisterhood, like kin.

A few years ago I was dining in a restaurant in Florence. A silver-haired black man got up from his neighbouring table and introduced himself to me and my mother in the restaurant. My skin and hair reminded him of his daughters'. This man from was Trinidad, an island near my mother's homeland of Barbados. We chatted and he invited me to connect with his Trini-Irish daughter in Australia. Sure enough, I got in touch with his daughter on my return to Sydney, and we compared stories. Julia is tall and gold-skinned with brown hair was in long artificial braids. She had grown up with her hair in an Afro, and this was not a happy memory. Fashionable now but back then, 'it was not OK' she said. And Julia had no choice, because her father lacked the skills or community support to give her alternative hairstyles. To style Afro hair takes skill, training. And it's so time consuming that it's a social activity in itself.

Although my experience was different, I can imagine how she must have suffered growing up. Multicultural Australia has had to claw its way up from a very racist, exploitative foundation in genocide and colonialism. Among my white Australian peers, even a German or British accent reason enough for harassment or 'othering' when they were growing up. Racism is more subtle there now... I experienced it mostly in intimate relationships. It was an extension of misogyny... being treated like a sort of novelty toy. My Trini-Irish friend validated my experience. "The men here have a problem with women like us... also with older women." She had married a French man she met in Paris. Her beautiful baby boy watched us while we talked.

More recently, in 2016, two little girls fell in love with me and I am with them ...in an Australian airport. A Brazilian dancer Juan, Juma from Kenya and his two daughters were travelling to Womadelaide music festival. Recognising me from the Brazilian dance community, Juan called me over to join them. After a few words with the adults, I responded to the curious gazes from the little girls. Because they looked like me when I was their age, again there was an instant feeling of recognition, kinship and curiosity. I sat down on the floor and chatted to them... who had done their pretty little plaits? Soon little Imara plonked herself in my lap. Her father was surpised at our sudden connection. We talked about dancing... before we got on the plane, I showed them the Running Man. Right there in the boarding queue the little girls copied me, oblivious to the stares of arriving passengers. Adorable! On the plane, I got a seat beside them and shared the plane ride. We crossed paths a few times at the festival, and kept in touch because we live in the same Sydney neighbourhood. I miss these little gals... no doubt growing up fast!