The smell of mandarin peel, horse sweat and leather on my hands after a ride through timeless lush paddy fields. I feel the continuity from plants, crops and trees through horse, dog, cat, chicken, pig, human. This continuity is celebrated in the imagery, costumes, statues, dances and offerings of the daily Hindu worship here. So different from the Christian separation from the animal world. 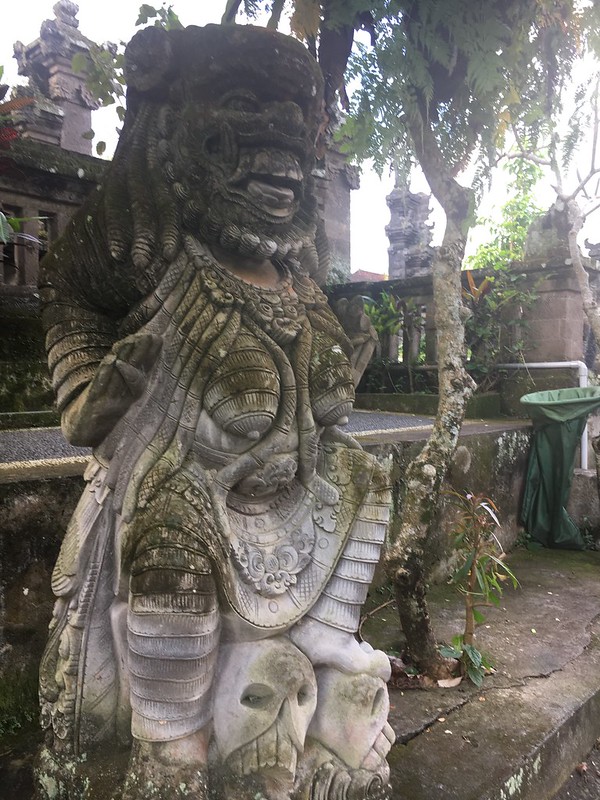 Yet I've seen more animal suffering here than anywhere I can recall. When people live close to their animals they can be surprisingly careless and cruel. In a restaurant: a small menagerie of caged birds includes a sulphur-crested cockatoo, grey skin where his white plumage should have been, constantly falling off his perch and hauling himself back on. While we eat, he constantly chews his metal bars and chains, struggling to be free. A calf tied to a tree has twisted himself into a choke hold and can't undo it. And then there's just the cruelty of nature when it meets the developing world...  the mangy, limping old dog nosing in the trash by the side of the road...  product of a place where domestic animals breed without regulation. Of course in the developing world, life is often harsh for humans too.

From my horse, riding off road through farms, I saw a man who looked very old, skinny and wrinkled, about 8m up a very tall tree, climbing chopping off branches with one hand on his way up, leaving small footholds between long, smooth sections of trunk. No safety harness of course. Two young men looked up from below. The old man looked happy and relaxed, like he performs this amazing feat every day.

People work hard here: most of the Balinese I've met are enterprising, honest, and resourceful. In the faces and bodies of old people, especially old women by the side of the road, traces of a hard life. In the art and statues, the old woman is recognisable by her heavy dangling breasts, long fangs, clawed hands, fierce, bulging angry eyes. She stands with one foot resting on a human skull. So the old female is evil, deadly ...but she has power in this god-like form, imposing like a lion or tiger.

A younger version of this evil demon exists... her breasts are small and pointed, her expression is fierce, and her claws ready for battle. Less frequently depicted are the angels: attractive young women and men with peaceful expressions and smooth hands in dainty poses.

The role of women in Balinese Hindu rituals is interesting. Daily offerings are mainly the task of women, who look like flowers themselves, in their elegant sarongs, as they shake water from marigolds and arrange blossom swastikas, to bless the home, the cafe, the shop.

I also went to see a traditional dance in a palace of Ubud. Legong dance: a pretty, seductive dance by three young women in tight, opulent traditional sarongs, had its origin in the dream of a king.

I loved the happy demon dancer, with his big claws, his tigerish face and his playful interaction with the audience. Was it a male or female? The guidebook said male, but sometimes demons are androgynous.

My favourite character was a mythical beast played by two dancers: one for the head and one for the tail, like a pantomime horse. But this beast looks more like a lion, with a big fur mane, snapping jaws, bulging eyes and a long tail. A few days later I saw the same beast in the water palace: a pair of statues guarding the bottom of the staircase, with wide open jaws and human feet, toes up in front, bottom up behind, like a stretching cat.

In Bali, men do most of the talking, perhaps because they have most of the education and freedom to roam public spaces. This is what I have learned in a few days by walking in streets, temples, palaces and galleries. My knowledge and understanding of Balinese culture is superficial, but I recognise patriarchy when I see it. Gender inequality is visible along with its usual side-effects. Sexual harassment in the street from taxi touts makes the walk home almost as unappealing as the proposed taxi ride with the creepy man. But sometimes you see a business owned and run by a woman. In Bali like elsewhere, daily life relies on the labour of women.